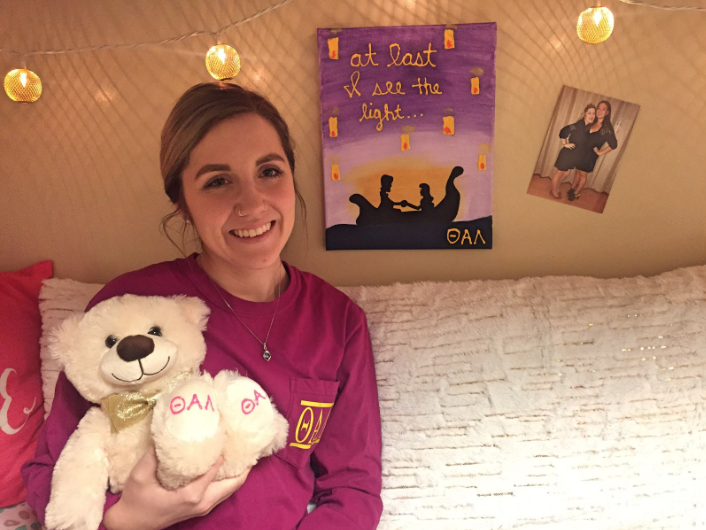 The conversation surrounding sororities and fraternities might leave a certain taste in your mouth. That taste could be good or bad, depending on whether you have been exposed to inaccurate representations of Greek Life. Movies and television shows commonly promote these alternative depictions.

Taressa Lacey, a junior at SUNY Plattsburgh, is a member of Theta Alpha Lambda, a local sorority. She rushed her sorority and became a sister during the Fall 2017 semester.

Q: Did you plan to join a sorority when you first began college?

TL: Yes. I did want to join a sorority, but I did look at colleges that didn’t offer Greek Life. Greek Life wasn’t the most important factor in what I wanted out of my college experience.

Q: Looking back, did you have any misconceptions about Greek Life?

TL: For sure. I feel like most of the time sororities are represented as cliques. The sisters are usually rude and provocative. Movies also fail to show the work involved in a sorority. They only show partying and drinking. I was aware that joining a sorority wouldn’t be just fun and games; however, I underestimated the amount of commitment it takes to be an active sister in an organization.

Q: Where did those misconceptions stem from?

TL: Greek Life misconceptions definitely come from motion pictures. I’ve never watched a college-based movie that accurately depicts Greek Life. I feel like whenever you mention the words “sorority” or “fraternity” around an older person, they look down on you, and a lot of that has to do with portrayals of hazing, partying and drug use when it comes to movies based on fraternities and sororities.

Q: How do the misconceptions differ from your actual experience in a sorority?

TL: I knew I would make friends, but I didn’t know how strong the bonds with my sisters would be. I know we will have lifelong friendships. I know that some of my sisters will be in my wedding party when that day comes.

Q: Which inaccurate representation of Greek Life bothers you the most?

TL: It irks me that movies and television represent sorority women as living the bachelorette lifestyle all the time, partying and not having any responsibilities. That’s not the case at all. What they fail to show you is the dedication that sorority sisters have to their community and organization. I have to have 20 community service hours logged per semester and 10 study hours logged per week. Greek Life at SUNY Plattsburgh requires that members hold at least a 2.5 GPA. If your GPA falls below that, you become an inactive member, which takes the fun out of being a sister.

Q: How has being a sorority sister changed your life?

TL: Before I joined Theta Alpha Lambda, I only had a few friends and I really didn’t socialize or have any fun. Now, I have made many connections through my sorority and I am so much more social. Overall, I am a happier person. I am in a better mental state now than I was before. Even my GPA went up. I am so glad I chose to be a part of my sorority.

Greek Life offers the opportunity for a student to settle into their campus with a support system. While media depictions of sororities and fraternities can be unsettling, for certain students, it may help them feel more at home.