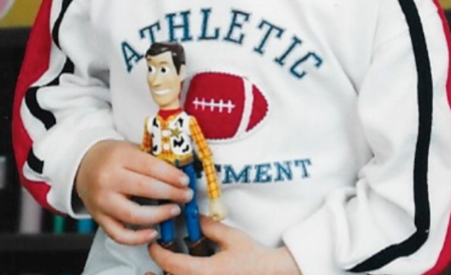 “What I lost that I wish I still had”

I can still smell the popcorn fumes that filled the movie theatre when I first saw the Disney masterpiece, “Toy Story.” Whenever I talk about the childhood film with my friends, I use that word masterpiece consistently. Am I a little bias? Oh… most definitely, but for good reason. My ties with this movie are rooted in my preschool days. Due to my obsession with the main character, Woody, a toy cowboy, my parents got me the action figure after weeks of me throwing tantrums in the living room. Tantrums, a child’s best used negotiation tactic, gotta love it.

When I first began schooling, I am not going to lie, I hated it. What kid wouldn’t hate it though? For four strong years, I got to laugh at my older brother as he got onto his bus to go to school, which might as well have been outerspace to me at that point in my life. I missed being able to play “Backyard Baseball” all day and go with my parents for the occasional ShopRite trip. So what do you do when you miss home at that age? Well, what did I do? I cried. From the second I got there. I cried during Recess. I sobbed during nap time. But the day I got Woody, that all changed.

I had a friend in him. He would tell me jokes when I pulled the wire from his back. The same three jokes, but oh man, were they crowd pleasers. He would say things like, “There’s a snake in my boot!” or, “Reach for the sky!” However, my personal favorite was, “Someone’s poisoned the waterhole!””

When I say I was inseparable from this toy, I mean no force on Earth could take that action figure away from me. Not even one of the most powerful forces known to all children: Mom on picture day. I went in with my hair combed, flaunting a new sweater that my mother had picked out for me, and Woody was in hand, as always. When the photographer told me in a gentle voice, “Okay, put Woody down just so I can see you’re beautiful face,” I knew something was up. I was cute, but by no means beautiful. I glanced over to my mother, who must have had her heart in her stomach, knowing that there was no way I was going down without a fight. So, I went ballistic. I threw a tantrum that stemmed from my light-up velcro shoes and stormed out of my mouth, having a clear entrance through my four teeth that had fallen out. If we’re being honest, the rest of this scenario is a little fluffy in my head. Bottomline: I took my preschool picture with Woody.

If at this point in the story you are feeling vicariously triumphant with my four-year old self, don’t feel odd. I get chills every time I think about that great battle. This makes it even harder to tell you the sad truth that is the end of the Woody era in my life. Fortunately, it was many years after that picture day. We had a good run, Woody and I.

One day, my mother and I were going through all of my old toys in the storage space under our basement stairs. I forgot they had existed. A feeling of excitement and nostalgia overwhelmed me. Woody was going to be in one of these bags! I would see “Kevin,” written in Sharpie under his left boot, to know he was not an imposter. Three bags. We went through all three bags. No Woody. I was 18 years old, but that same kid that belted in the middle of picture day was coming back. “Mom, where is he. He couldn’t have just vanished… Oh my goodness, it’s real. The movie’s real!” I still think to this day he got up and left. Nothing will change my mind. I always like to think he settled down and is working at a comedy club, telling his infamous three jokes, with the kicker of course being, “Someone’s poisoned the waterhole!” HAHA… still gets me every time.