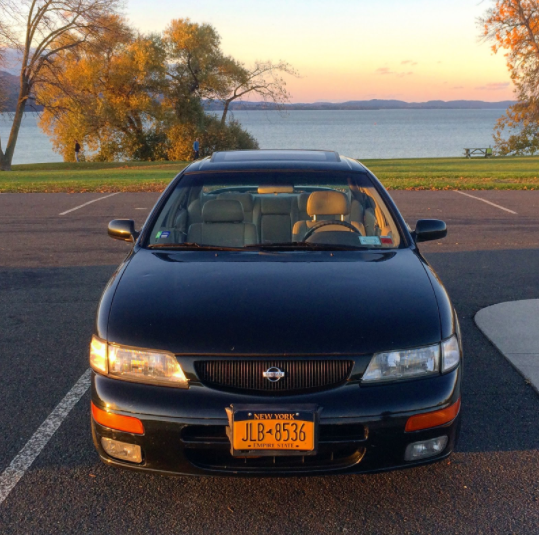 This is my 1996 Nissan Maxima Sport, a car that delivers unimaginable reliability, modern-day amenities and a beautifully balanced engine. I have owned this vehicle for two fantastic years. I store it during the winter and drive the hell out of it in the summer. Since I attained it, I have replaced a slew of parts on this vehicle myself with relative ease. It has been a joy to own; its value and rarity continue to grow every year.

For this generation, the Maxima was offered with a reliable four-speed automatic transmission or a sporty five speed manual which is extremely rare. Ninety-five percent of these Maxima’s were optioned with the automatic transmission on lower trim levels. My example is equipped with the five-speed manual, which allows this car to reach a top speed of 143 mph. This made it one of the fastest four-door Japanese sedans from the mid-’90s. SE stands for sport edition, which is my car’s spec. It is equipped with a rear spoiler, a sunroof, automatic climate control, BOSE stereo, cruise control, leather heated seats, an assisted braking system, and high-intensity fog lights, which makes it an extremely well-optioned car for the mid-‘90s. My modern Volkswagen doesn’t even have auto climate control or a premium name brand sound system.

Pricing for the Maxima back in 1996 ranged from $22,000 all the way to nearly $35,000, making it a main competitor for the BMW 3 Series, Mercedes-Benz E Class, Lexus ES Series and the very popular Toyota Avalon.

The power plant for this car is an in-house designed engine by Nissan. Designated VQ30DE and later with VQ30DE-K for improvements. A three-liter, twin-cam lightweight aluminum block V6 with four valves per cylinder, a timing chain and NDIS (Nissan Direct Ignition System). This is one of the most reliable engines Nissan had developed before merging with the French brand Renault. With 190 horsepower, it delivers a very stout power band that revs to 6500 RPM effortlessly. The engine averages 27 miles per gallon with mixed driving and the range can come close to 400 miles per fill-up.

The exterior of the Maxima is buff, with a long hood and squared-off rear. It has a sloping roofline that accentuates the stance of the vehicle standing still. The design of this car was praised for its aerodynamics. It has a sportier vibe than its more luxurious Infiniti I30 counterpart, and the rear spoiler on the SE trim adds a nice touch of flair.

For being 25 years old, it is easily one of my favorite cars I have owned. The Nissan Maxima is a fantastic summer cruiser, and I plan to keep it as long as possible. For me, there are a few small gripes, though. The legroom under the steering wheel is tight, and a comfortable seating position is slightly compromised because of my height. A good stretch after a long drive helps, so it doesn’t ruin the car for me.

The Nissan Maxima was Motor Trend’s Import Car of the Year for 1995, and the Maxima SE again made Car and Driver magazine’s Ten Best lists for 1995 and 1996. It is a fantastic car that I would totally recommend if you can find one that has been  well mantained.