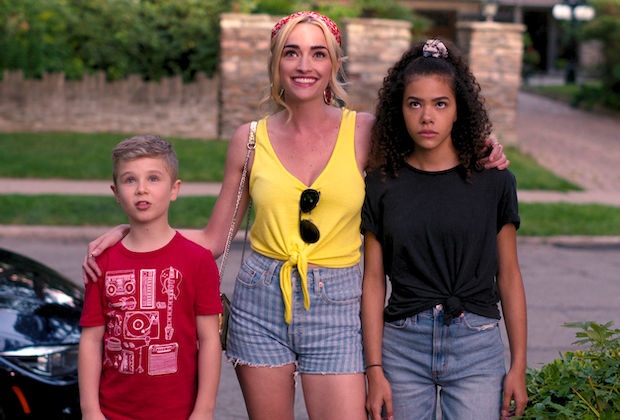 The new Netflix series “Ginny and Georgia” came out on Feb. 24 and has already made its mark in the media. The original series has held a spot in Netflix’s top 10 for the past few weeks, currently sitting at number four.

“Ginny and Georgia” is about a small family; Georgia, the mother, Ginny, Georgia’s 15-year-old daughter, and Austin, Georgia’s 9-year-old son. Georgia moves her and her kids to small-town Wellsbury, Massachusetts, after her previous husband died of what was assumed to be a heart attack. The show mainly follows Ginny and Georgia as they learn to adapt to their new town and life.

I found this show to be really entertaining and captivating, while a little cringy at some parts, although many of my favorite shows have their cringy moments. Throughout the show, we see flashbacks of Georgia’s life and how she ended up meeting Zion, Ginny’s father, and the type of life she had to follow to survive. It’s revealed later in the episodes that Georgia’s previous husband didn’t actually die from a heart attack; Georgia had actually poisoned him with wolfsbane because she caught him inappropriately touching Ginny. While the decisions that Georgia makes are dangerous and reckless, she does have reason behind everything she does. It may seem like she is making rash decisions on a whim, but she does it all to try to provide a good, stable life for Ginny and Austin.

Ginny finds herself in a very confusing friend group who call themselves MAN (MANG with Ginny included) that includes Max, Abby and Norah. Max is definitely the most genuine friend and cares about Ginny. In an earlier episode, Ginny goes out with Abby and Norah shopping, and they convince her to shoplift, but when Ginny is caught, they just throw her under the bus and don’t stick up for her or help her at all. Throughout the show, they gradually seem to become better friends, although Abby never really seems completely genuine. To me, she seems like someone who would turn on her friends very quickly if she had the chance.

Ginny and Georgia both also find themselves caught up in love-life drama. Ginny is stuck in a love triangle with her boyfriend Hunter and her best friend’s brother Marcus. Hunter treats Ginny very well and loves her, but she also can’t keep her mind off of Marcus, who she lost her virginity to when she first moved to Wellsbury. In the last episode, Ginny is torn because both boys tell her that they love her within the same 24 hours, but it inevitably explodes when one of Ginny’s friends, Abby, blurts out to Hunter that Ginny cheated on him with Marcus, to which Marcus said that it was a mistake, thinking that would have made the situation better (spoiler, it did not make anything better.) Georgia also finds herself stuck between two men, Paul, the town mayor who she works for and also starts dating (a little inappropriate but OK) and Zion, who comes into Wellsbury and starts to confuse things for Georgia. Georgia also made a very poor decision and ended up sleeping with Zion while she was dating Paul. She tells Paul the truth, and instead of breaking up with her, he tells her that he loves her and shows her the ring that he bought after their first date because he knew he wanted to spend the rest of his life with her. Personally, I think Georgia should stay with Paul because from what we’ve seen on the show he’s a great influence for her and brings out seemingly the best in Georgia. Ginny revealed earlier in the show that everytime Georgia and Zion are together, it only ends in a blowout. I also think Ginny should end up with Marcus because even though Hunter is very good for her, I feel like Marcus understands her troubles a little better and they seem to have a much more genuine and closer relationship.

While many people loved this show, there were many people who criticized some of the scenes and lines in it. In episode 10, Ginny tells Georgia, “You go through men faster than Taylor Swift.” There were many people who weren’t happy about that line and called it sexist and offensive, including Taylor Swift herself. “Hey Ginny & Georgia, 2010 called and it wants its lazy, deeply sexist joke back. How about we stop degrading hard working women by defining this horse shit as FuNnY. Also, @netflix after Miss Americana this outfit doesn’t look cute on you. Happy Women’s History Month I guess,” Swift said on Twitter.

I personally didn’t think much of this line at first, and I’m obviously not the one the joke was about, but I do realize how frustrating this can be, especially when this has been such a dragged on “joke” for Swift. On the other hand, Ginny, in the show, is 15 and I see this as something a 15-year-old would definitely say. I’m sure I said something like this at 15 as well, so I’m not sure it deserved all of the hate that it received although I’m sure that there were plenty of other jokes the writers could have come up with instead of that.

Another big issue that many viewers had was the “Oppression Olympics” in episode 8. Ginny and her boyfriend Hunter, who is half Taiwanese, get into a fight caused by Hunter winning an essay contest over Ginny. Ginny makes it very clear that she believes Hunter only won the contest because their teacher is racist and has something against Ginny, which causes Hunter to get angry because he followed the assignment and wrote an essay while Ginny didn’t quite follow that structure and wrote a poem. The argument began to spiral out into what Hunter called the “Oppression Olympics” because Ginny felt she had life tougher for being half black than Hunter did for being half Taiwanese. This whole scene felt very uncomfortable for me because it just didn’t seem like a conversation anyone would ever have. I also feel like I personally can’t say much because I am white and have never faced any kind of discrimination or difficulties that were caused by my skin color or ethnicity. This scene did anger a lot of people and caused an uproar on Twitter.

Whitney Hill wrote on Twitter, “As a biracial person for the last 34 years, I…have never had a conversation like this with any of my biracial or multiracial friends or acquaintances. I don’t rep all biracial folks but this is really, really not a thing, at least not for me. This is just so cringe.”

Another user @ban_0525 criticized this moment because the writers and creators of the show are two white women and are attempting to create this scene without having actually experienced anything like this.

Aside from the few questionable moments in the show, I really like it, and I would definitely recommend it to anyone if they’re looking for a show to start watching if they aren’t ready to commit to a longer show.