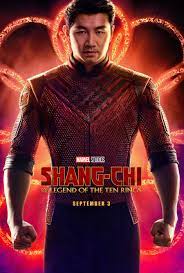 The new Marvel movie “Shang-Chi,” directed by Deston Daniel Cretton came out Sept. 3, 2021. This highly anticipated movie maintained the top spot in the box office for the first two weeks, earning $145.6 million in the U.S. and Canada alone, $257.6 million globally.

I was personally very excited to watch “Shang-Chi,” especially after seeing the trailer before the Black Widow movie. Shang-Chi is the latest addition to the MCU, putting it in Phase Four. This movie introduced new characters: Shang-Chi, Wenwu (The Mandarin), and Katy (Shang-Chi’s friend who seems to possibly have a role in future movies as well) and also brought back familiar faces such as Wong from “Doctor Strange” and Trevor Slattery who we met in “Iron Man 3.”

The beginning of the movie started a little slow but I did find it interesting and necessary because it gave viewers the background of the Ten Rings legend. It didn’t take long for the pace to pick up and dive headfirst into the action. We were first hit with the group of men who attack Shang-Chi on the bus, who we later find out were sent by his father. This was the first fight scene of the movie, I found it to be equally as thrilling and funny, something that I noticed was a common theme throughout the movie. I like when movies can add in humor without making it cheesy or cliche.

After the initial bus fight scene, Shang-Chi and Katy head to Macau to find Shang-Chi’s sister, Xialing, who they learn runs a fight club that she built after escaping from their father. We also see Wong for the first time in the movie at the fight club.

I know that the addition of Wong in the movie was necessary to set up later events and movies but I just thought that it was really cool and interesting to see a familiar face even though he wasn’t necessarily doing anything significant at the time. We see Wong again at the very end of the movie for a short scene, as well as in the first post-credits scene, along with holograms of Captain Marvel and Bruce Banner (who when we last saw was permanently big and green, so I have a lot of questions about that.)

Something small that I noticed, I’m sure other Marvel fans noticed as well, was when Shang-Chi was in his superhero outfit, he was still wearing what looked like normal jeans and sneakers. Some elaborate and crazy superhero outfits can be really cool, but I liked how casual his outfit was. I feel like it represented him well because he had his dragon scale top that was made by his mother’s people but then his pants and shoes were more casual which seemed a lot like his attitude and demeanor. When he decided to run away from his father he chose to work as a valet driver and have a more low-key life.

The 2 hours and 12 minute movie seemed to go by so much faster than that. The whole time in the theater I was on the edge of my seat and silently screaming over the fight scenes and little Easter eggs that are always left throughout Marvel movies. There were even a few times that I had to refrain from laughing too hard because of a certain moment or line.

Overall I really enjoyed the movie and I thought it was a great addition to the MCU. I’m excited to see what exactly this movie is setting up for next. I’m also excited to see Shang-Chi, and possibly other characters, in future Marvel movies and hopefully a second “Shang-Chi” movie.