Dead From a Disease

Mac Miller was found dead at the age of 26 from an apparent overdose. Sept. 7, 2018 will now always be the day that addiction took a life from someone who used his platform to help and guide others.

Malcolm James McCormick, known by his stage name Mac Miller, was a rapper, singer and producer. He was somebody’s son, nephew, cousin, best friend; a loved one. He was also an addict and never failed to address that with his fans.  Miller said during an interview with Noisey in 2013, “Drugs are dangerous, dude. But they’re awesome. Just dangerous. Drugs are not like a new thing. Especially for me, I’ve been doing drugs since I was 15.”

In Aug. 2018, Mac Miller did an interview with Rolling Stone, where he said did not classify himself as an addict. Miller said that if a bunch of people considered him one that was OK. Adding “Have I done drugs? Yes. Am I an addict? No.” This was just a month before his apparent overdose.

Following his death, fans fled to Twitter and other forms of social media to place blame on Miller’s ex-girlfriend, singer Ariana Grande. The two confirmed their relationship in August 2016 until their recent split in May 2018. Following their spilt, Miller was charged with a DUI and a hit-and-run. At the time of his arrest, his blood-alcohol content was a .15 when the legal limit in California (where the incident took place) is .08.

Following the breakup, Miller said during an interview, “It’s all positive energy. I’m happy for her and [the fact that she’s] moving forward with her life, just as I’m sure she is with me.” The blame was solely placed on Grande by angry fans. On her latest post following Miller’s death, Grande disabled the comments due to an outpour of negativity.

A study done by Gene Heyman, the author of “Addiction: A disorder of choice,” found that people do not choose to be addicts. Somehow and somewhere, society made it acceptable to look at addiction as a choice. Addiction is not a choice. It is an illness. An illness that affects over seven million Americans as of 2014. The National Institute of Drug Abuse (NIDA) found that drug abuse is a disease. They also stated, “Addiction is a chronic, often relapsing brain disease…[s]imilar to other chronic, relapsing diseases, such as diabetes, asthma, or heart disease….”

Miller was often open about his daily struggles, revolving around his mental health and drug addiction. During an interview with The Fader in 2016, Miller said, “There’s no legendary romance, you don’t go down in history because you overdosed. You just die.”

Vanessa Mickalonis, a fashion and art student at The Fashion Institute of Technology, said she fears fans will miss an important lesson in Mac Miller’s death.

“I think the worst part out of all of this, is that in a few months it’ll all just become background noise. The problem will once again be swept underneath the rug. And that is exactly what we can’t do this time.”

Mac Miller isn’t the first artist to die from a drug overdose, and he certainly will not be the last if the conversation does not change. Although, Miller is the one of the first of (millennials) generation to be taken too soon by drugs. Many people choose to treat their addiction in silence. But if addiction is continued to be looked upon as “wrong” or “pathetic,” rather than an illness that can be managed with proper treatment then it will stay just as difficult for people to seek recovery. It’ll just be a matter of time before another artist, influencer, etc. is taken because they were scared to ask for help.

Friends of Miller’s such as Chance the Rapper, Macklemore, Frankie Grande, Post Malone and more have posted their addiction and sobriety struggles following his death. They have become more public with it by using Miller’s death as a platform to show that it can affect anyone. In Macklemore’s post he wrote, “A disease that is out to kill us, and when left untreated eventually will.”

Malcolm McCormick lost his battle after a long addiction to drugs. It wasn’t meant to be selfish and it (probably) wasn’t meant to happen. He helped millions of his fans get through hard times with his lyrics. He gave them courage and pride to admit their struggles, and taught them that each day is a gift not a guarantee. Placing the blame for his death on others won’t fix the problem. Making it known that this is something that millions of people struggle with and that it is OK to seek treatment will push this world in the right direction. 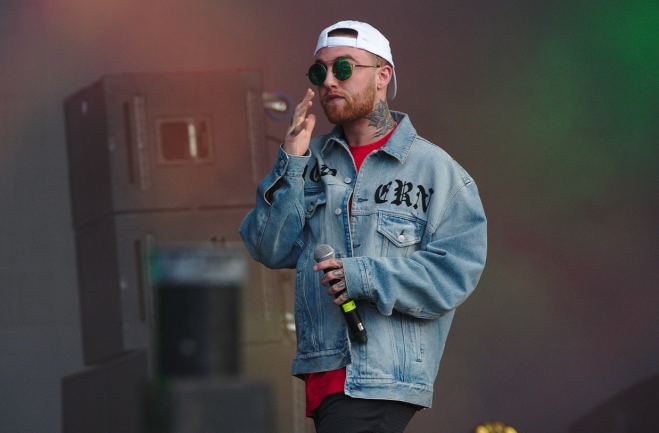 Mac Miller performing at the Splash! Festival in Germany in 2017. Photo by Nicolas Völcker. (Under CC BY-SA 4.0 license. No changes have been made.)

On Sept. 14, 2018, Ariana Grande took to Instagram to say her goodbyes. “I’m so sorry I couldn’t fix or take your pain away. I really wanted to. The kindest, sweetest soul with demons he never deserved. I hope you’re okay now. Rest.”

Rest easy Mac Miller, you will be truly missed.

If you or someone you know is struggling with substance abuse or addiction, you can call the  Substance Abuse and Mental Health Services Administration National Helpline at 800-662-HELP (4357) any time of day or night.