Why We No Longer Watch AMC’s The Walking Dead

WARNING: This article contains spoilers relating to AMC’s The Walking Dead. If you don’t want certain aspects of the series spoiled for you, stop at the “*SPOILERS*” tag below.

The Walking Dead, in case you somehow haven’t heard, started as one incredible TV show. The series contains zombies, drama, romance, gore, action, intensity and characters you can’t help but get attached to. It really has everything you could want in a show, or at least it did.

The Walking Dead once set the bar for a television show. In a testament to its quality, the show has won two Emmy Awards. It won “Most Bingeworthy Series” at the Critics’ Choice Television Awards in 2015. The show has been nominated for more than 100 awards and it has won half of them. The show even held an absolutely jaw-dropping 17.3 million total viewers for their season 5 premiere, meaning TWD had two times the population of New York City watching.

However, if you’re like me, you haven’t cared enough to even consider watching the latest season, and that sentiment is absolutely tragic for a series that was once heralded by so many. After chatting with a few students at SUNY Plattsburgh, it was clear that others shared the same feelings towards the series.

In short, this is why we don’t watch the The Walking Dead anymore:

Every other complaint we have seems to be a symptom of the above problems. For example, Maria Lefebvre, an international business major, mentioned the death or other removal of main characters from the show, namely Rick and Carl Grimes, as a huge influence for not watching anymore.

Choices like these arguably reduce the quality of the show for many people because you’re invested in that part of the series. When it goes away, so does that investment or interest. It would be different if the show was better at introducing new characters you care for just as much or replacing them with something else, but it struggles with that too.

The Walking Dead, is rife with filler, and that filler is deadly to many people’s interest in the show, as evidenced by another one of Lefebvre’s reasons for not watching. “Some of the episodes drag on and contribute nothing significant to the plot.” This trend in the series started early on with almost all of season 2, where the cast decided to live farm life. 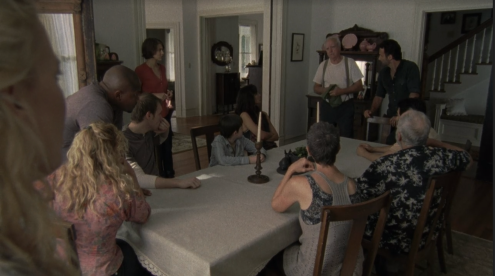 Cast members of season 2 gathered in the dining room of the homestead. Screenshot captured by Cole Garrow. All rights go to AMC’s The Walking Dead.

There is also the lack of special effects quality, which time and time again ruins the experience. The Walking Dead often still has impressive special effects, like zombie makeup and the bloody scenes when it comes to anything horrific, but their CGI can be pretty awful at times.

Animals in the series especially tend to look like the work of a high schooler with aspirations of being a visual effects artist. The deer in The Walking Dead in particular seem to get it pretty bad in their guest appearances. Specifically, the real deer in season 2 that looked horrible when “getting shot”.

Carl and the deer in season 2 getting shot. Gif created by Cole Garrow. All rights go to AMC’s The Walking Dead.

Although, it got even worse in season 7, where they looked like they loaded straight in from a Playstation 2.

Rick climbs a structure and sees the CGI deer in season 7. Gif created by Cole Garrow. All rights go to AMC’s The Walking Dead.

Forget about the action scenes in season 8, which simply do not live up to earlier ones.

Visual quality aside, the quality of the story over time has really let us down as well. That isn’t to say that it was never interesting or doesn’t continue to have interesting moments. Though the issue remains that most seasons follow a basic guideline and they hardly deviate. This once great show has lost its novelty and our interest.

The plot for almost every season is laid out below:

Walkers are a problem → Find and clear out shelter → Build up shelter → Deal with internal drama → Camp isn’t safe anymore because someone or something happened → “Carl!” → Repeat

Loren McBride, another student, captured the question of why we don’t watch anymore well when she said, “The show went downhill and just wasn’t very good toward the end.”