Arts and Culture by Anthony BubbicoApril 17, 2019

Everyone’s favorite flying elephant has taken to the skies once again. Disney’s live-action remake of Dumbo was directed by Tim Burton and is full of fresh adventure.

Burton is known for films like “Edward Scissorhands” and “The Nightmare Before Christmas.” His films feature distinct qualities, including distorted imagery and unlikely protagonists, which are still in abundance in this new Disney outing.

“I personally was very pleased with the movie,” said Heather Geier, TV-Video major at SUNY Plattsburgh. “I know a lot of people were skeptical, but I thought Tim Burton did a fantastic job with the story.”

The movie begins with war veteran Holt, played by Colin Farrell, returning to the circus where he once worked. However, this time he is missing an arm and his wife, who died after catching the flu. He is reunited with his children, Milly and Joe, and sent to work with the elephants.

One morning, Mrs. Jumbo, the circus’ prized possession, gives birth to a baby elephant, Jumbo, who is later renamed Dumbo by the laughing audience. Initially everyone sees the baby elephant as a freak, having big floppy ears. This all changes once the baby takes flight.

This isn’t anything new for Burton. In “Edward Scissorhands,” he explored a similar theme, a man looked at as an abomination until he creates beautiful sculptures with his scissorhands.

The story also deals with the theme of separation. Dumbo’s mother is taken away from him early in the movie. This mirrors the original film released in 1941, which Burton borrows from but for the most part, leaves alone. He updates it by linking Dumbo to Milly and Joe, who have also lost their mother.

“That was so sad,” Geier said. “Disney definitely played with your emotions. They always do. There was a lot of sadness and separation in the whole movie, not just the end.”

Dumbo and the rest of the circus are eventually lured over to perform at Dreamland, owned by V.A. Vandevere, played by Michael Keaton. 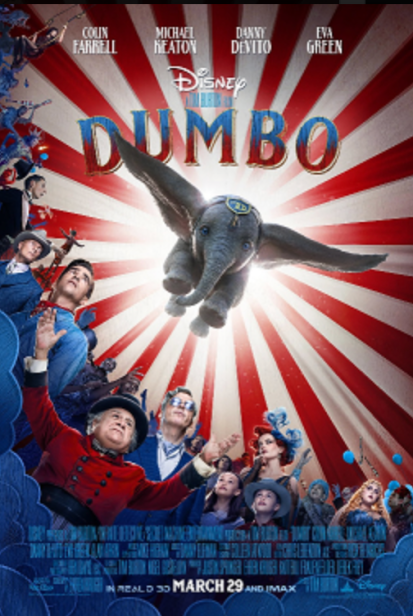 The theatrical release poster for the 2019 remake of “Dumbo.”

Fans of “Batman Returns” will rejoice as Keaton is reunited with Danny DeVito, who plays circus owner Max Medici. Keaton gives a larger than life performance, reminiscent of his work in Burton’s “Beetlejuice.” He is balanced out by DeVito, who is equally larger than life, yet sympathetic and warm as Medici.

Dreamland almost comes off as anti-Disney. It’s a circus trip on acid with bright lights and attractions that surpass the skyline. Overlooking all of that is Vandevere, who is anything but caring and nice.

Burton has an interesting history with Disney. He was first employed by them in 1979 as an animator on “The Fox and the Hound.” In the book, “Burton on Burton,” edited by Mark Salisbury, Burton is vocal about his dislike for the company.

Perhaps Burton identifies with DeVito’s character the most. Medici is just trying to see his vision through and when given a hand, he takes it, not knowing he has signed a deal with the devil.