What to Watch on Netflix in May

May brings the end of the college semester and the final month before summer comes into full swing. During this time, having something to watch can help hold you over until summer vacation comes around and reduce stress. That’s why it’s important to pick the right thing to watch, whether it be a movie or a show.

Every month Netflix removes and adds a plethora of movies and shows respectively. With so many options being added and taken away, one might be lost when they log into Netflix when a new month comes around. Here are five projects, both old and new, coming to the streaming service in May.

Today in the United States, one of the most heavily debated and polarizing topics is politics. Since the 2016 election, it has been a topic for conversation almost everyday, usually spoken about to exhaustion. This led to one of the most covered midterm elections of 2018. It had one of the biggest turnouts in U.S. election history in recent years and exposed us to new and growing names in the political world.

This led to one of the new and anticipated projects coming to Netflix, being a documentary. “Knock Down the House” is set to follow four female candidates for the democratic party: Cori Bush (Missouri), Paula Jean Swearengin (West Virginia), Amy Vilela (Nevada) and Alexandria Ocasio-Cortez (New York) as they campaign for seats in the House of Representatives. The documentary will bring insight to their campaigns and the movements they are based on.

“Personally, I can’t wait for this one,” Imani Joly said.

“I try my best to stay as up-to-date with politics as I can. The last midterms were a great time to be into politics and when I heard about this documentary, I was very excited. Ocasio Cortez has been quite the figure as a result, and I can’t wait to see how her campaign was rolled out.”

A new Netflix original film has garnered quite the buzz since its first showing in 2018.

The new thriller follows Dear White People’s Logan Browning and Get Out’s Allison Williams. Logan is a rising star as a cellist in a well-renowned music school. Allison Williams’ character, a former declared “musical prodigy,” seeks her out in an attempt to garner attention and find what she’s missing to finally breakout onto the scene. The meeting results in an intense rivalry that appears to go down a more frightening and dangerous path on both sides.

It has been very well received and is one of the most anticipated Netflix originals, let alone movies, of the entire year.

Though not a Netflix Original, this series of films is one of the most original to date.The Matrix series has made both a name for itself and carved its own piece into pop culture since its release in 1999.

The story follows Neo, played by Keanu Reeves, as he fights, and bullet dodges his way through a world that is not what it seems to the naked eye.

“I mean what can you say about this movie that hasn’t been already,” Wyatt Malloy said. “These are some of my favorite movies of all time and having one place to watch all three is a great move for Netflix.”

The three-movie series is still referenced to this day and still heralded for its original concept and groundbreaking visual effects of its day. Now all three will be available for binge. 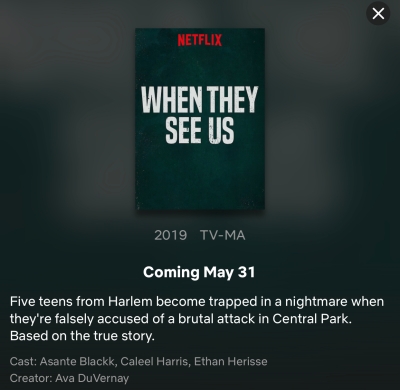 When it comes to making a movie or a show, one thing that can help sell it and garner attention is a big celebrity name attached to it. What bigger name could you need than Oprah Winfrey?

Produced by Oprah, “When They See Us” explores the true story of the controversial and infamous case of the Central Park Five. The four-part series will give a look into the case that left five black and latino teenagers wrongly convicted of the rape of a white woman during the 1990s. The series is directed by Ava DuVernay, known for her recent directorial work for “Selma and 13th.”

It’s set to be one of the biggest releases for Netflix this year. 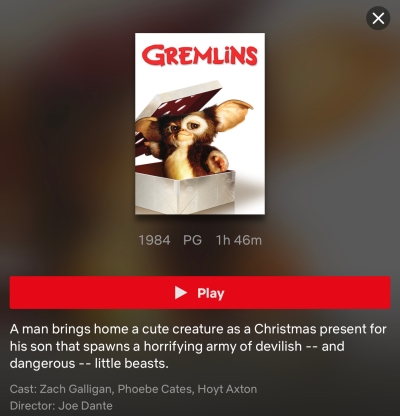 Some movies will always have a special place in pop culture that can last decades. Those tend to be the classic films we all love. Movies that are passed down from parents to their kids, and so on. We still love them even if over the years the quality and standards might not hold up too well when compared to the films of today.

One of those films will finally be is finally available to stream on Netflix—“Gremlins.”

Since its release in 1984, “Gremlins” still hasn’t faded out. The comedy horror movie for the family, revolves around the worst possible outcome you can have when you don’t follow the directions for taking care of these strange, but arguably adorable creatures. You can still hear and see references to the classic movie in many recent movies and shows. The movie has had a lasting impact on the industry for all movies like it and still holds a place in many households to this day.