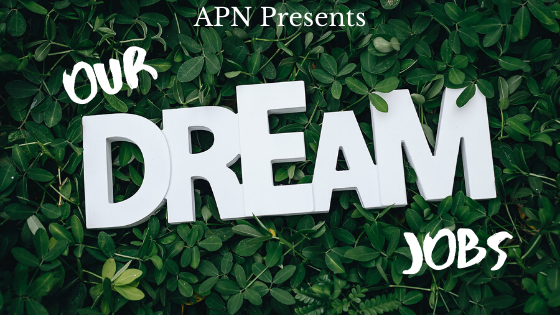 When you start school when your younger the question you get asked to think about a lot is, what do you want to be when you grow up?  A lot of young kids will answer; teacher, astronaut, vet, doctor, etc. Now reflecting on the same question as college students here are some APN staff members’ future dream jobs.

I have always been infatuated with the video game industry. I knew I wanted to be in the industry, but I wasn’t sure where my place would be. I thought about animating, but after struggling in 3D animation classes in high school I dropped that path. Next, I decided to give computer science a shot which morphed into cybersecurity. Once again, I dropped that path to pursue something else I love, writing.

This led me to wanting to work at either one of my favorite companies, Blizzard Entertainment, or Riot Games. I would love to be involved with content writing; creating blog posts or articles and engaging with fans across the companies’ social media. One of my favorite things about these companies is how close they are with fans of their content. I hope one day to be able to reach out and interact with them on the companies’ behalf with entertaining, and informative content.

And if I was President

The minute the Congress called my name

Who do you think you’re fooling?”

I’ve got the presidential seal

I’m up on the presidential podium

My mama loves me, she loves me

She get down on her knees and hug me

For nearly as long as I can remember, I’ve wanted to be President of the United States of America. My earliest memory of a historical event is of the funeral of President John F. Kennedy in November 1963. I have no recollection of Kennedy in office, but his funeral as watched on TV — with the horse-drawn, flag-draped casket crawling along the crowd-filled streets of Washington, DC — is etched in my then 5-year-old’s memory. I specifically remember crying because one of my favorite programs had been preempted by the funeral: “Superman.” It’s occurred to me since that I was likely affected by how upset my parents must have been by the president’s assassination, but it’s hard to overlook the symbolism of my connecting Superman with JFK. In death, President Kennedy became an early hero of mine, as did Abraham Lincoln, whose youthful self I played in a school production when I was in second grade. By the time I got to high school, I was steeped in American politics along with school-related issues and was elected student council president in eleventh grade. I attended both the American Legion Boys’ State (where I unsuccessfully ran for governor) and Leadership Training Camp prior to my senior year in high school; was admitted to Columbia University, an Ivy League school, whose previous university presidents included Dwight Eisenhower and whose alumni included such Founding Fathers as Alexander Hamilton and John Jay; and I considered the prospect of attending law school once I finished college. It seemed then I was on a path that could have led to a successful career in politics and even a shot at the presidency.

At Columbia, however, my interests quickly gravitated from politics and law to creative, writing, theater and journalism. Two semesters as Features Editor of the Columbia Daily Spectator—essentially, a full-time, nonpaying job grafted on top of a full class schedule — ruined my GPA and dreams of attending Oxford or Cambridge for graduate studies, one typical path taken by would-be U.S. presidents. Seven incompletes kept me from graduating with my class (of ’80), though by the time I completed enough of them to graduate, in 1983, I later learned that my classmates that year included one Barack Obama, whose path I never crossed on campus. My first jobs out of college were in book publishing, but I never lost interest in politics and the presidency and, over the years, those interests have intensified. Watching and sometimes even studying the remaining presidents in my lifetime — Lyndon B. Johnson, Richard Nixon, Gerald Ford, Jimmy Carter, Ronald Reagan, George H.W. Bush, Bill Clinton, George W. Bush, the aforementioned Obama and now Donald Trump — I’ve often wondered what I’d do differently if I had their job. A lot. I’d want to be a true champion of the People, an advocate for the poor and the powerless, a president more like Lincoln or Franklin D. Roosevelt than any of their successors. Young dreams die hard. It seems virtually impossible now that I will ever attain the office I once thought was in the realm of possibility. As a member of the Green Party, which typically nominates people who have not held high elective office, if any, it’s still conceivable I could actually run for president. At my age and given my modest personal circumstances, it’s a future dream role I’m happy to hold onto.

For the past couple years, I’ve had a passion for helping others in any way I could. As a child, I knew I wanted to go for a career that primarily focused on self-care and guidance, although I was stuck between teaching and counseling. After pursuing an education path for nearly 4 years, I dropped the teaching path to pursue counseling instead. After graduating with my bachelor’s in English, I want to pursue my master’s in Clinical Mental Health Counseling and eventually, a PhD in Counselor Education and Supervision.

After college and before earning a doctorate, my ideal job would be a mental health counselor or a mental health technician. I would love to work with clients one-on-one in a private setting. One of my favorite parts about counseling is being able to empathize with clients and see situations from multiple points of view. Someday, I would like to make great contributions to the mental health field and to help those in need.

I do not have a future dream job. As an inquisitive child I have always faced the problem of having too many options to choose from. I feel like I am forced to make a single decision that will shape the rest of my life and that has always scared me. One answer alone will only make me uneasy, yet the short and simple response is what everyone wants. I am interested in many things: Professional writing, journalism, photography, video production, entertainment, providing something to the general public in the form of writing, video, audio, or through any other medium. I have the desire to be flexible and to travel, so perhaps working remotely would be best suited for me. Having these options makes me feel like I can be more useful for an array of things, rather than just one particular thing until I retire.