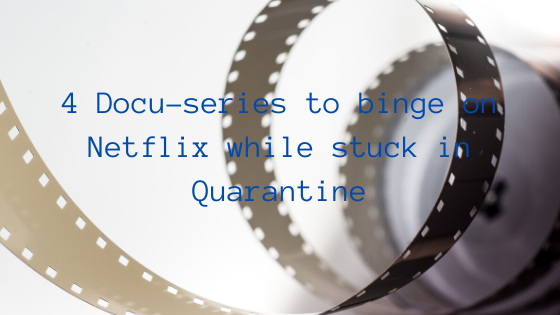 4 Docu-Series to Binge on Netflix While Stuck in Quarantine

Sometimes all you want to do is sit on the couch with a bag of chips and binge-watch a new show on Netflix. Over the past few years, the documentary genre has blown up, specifically those shows dealing with true crime. Docuseries are easier to digest, given that they are broken up into episodes and people can watch them at whatever time is convenient for them and can even get more content and information because of the extended format.  Here are five docuseries available on Netflix to view in one sitting or whenever you’re able to.

Warning: This series is very graphic and can be disturbing to viewers.

This limited series tells the journey of an online investigative group tracking down murderer Luka Magnotta. The online group began in 2010 on Facebook led by two users, under the aliases John Green and Baudi Moovan, who were outraged after a video, titled “1 boy 2 kittens,” was posted portraying an unknown person playing with two kittens before suffocating them in a vacuum seal bag.

“The two people that did all the investigating show that all life is precious in all forms,” Viewer Brad Drollette said.

The unknown man, later known to be Magnotta, continued to post videos showing him torturing and killing other cats and eventually a human: Chinese exchange student Jun Lin.

“The dude was a maniac that dug his own grave through social media thinking he would never be caught, but he ultimately learned that you should not f**k with cats,” Drollette said.

This Netflix original discusses the life, career, controversies and death of former New England Patriots tight end Aaron Hernandez. The series tells of the murder of Odin Lloyd, Hernandez’s fiance’s sister’s boyfriend, and how Hernandez had been connected to other unsolved crimes including a double homicide drive by in Boston.

Hernandez’s sexuality was also a major aspect of this series, with former classmates and teammates saying he had experimented with Hernandez during high school and how the former NFL star had wished to keep his sexuality a secret his entire life. Plenty of twists and overall shocks are spread throughout the show, making this a very bingeable series to get your true crime fix.

With two seasons of 20-minute episodes, you’re sure to find at least one that suits your interests, and that doesn’t take up hours of your day.  Online news website Vox teamed up with Netflix to create this mini-series where episodes range from weed, the female orgasm, computer coding, tattoos, cricket, political correctness and more.

The parts break down the very basics of what you need to know about the topic and, as the title suggests, explain how they work, why they are so popular, or why anyone even cares about it. Netflix and Vox also produced two more similar shows “The Mind, Explained” and “Sex, Explained” getting more specific as to what theme the episodes follow, rather than just random topics.

An older, historical documentary based upon the second World War. This series has hour or so long episodes, breaking down specific events and or eras in the world. Throughout the season, the episodes will switch subjects, from Germany, to Japan, to the United States.

“World War II in Colour” will enrich the viewer with lively colors in a time that is sketched in our memories as black and white. Give this a watch if you love history, and want to see that history from the point of view of those who lived it.