Arts and Culture by Jason SmithNovember 8, 2021

Even if you have been involved with financial matters for your entire life, chances are you have no idea what Dogecoin, XRP, Solana, Bitcoin and NFTs are all about.

These are all forms of currency that have been thrown around in the past year as the U.S. economy found unique ways to rebound itself from the COVID-19 pandemic.

However, artists and sellers alike should be discouraged to hop on a platform in which they have nearly no knowledge of how it works. A lack of knowledge, partnered with your typical market unpredictability, can be a recipe for disaster. For example, Bitcoin is a digital currency which operates free of any government oversight. However, due to the lack of regulation, Bitcoin’s prices constantly fluctuate and with sellers and buyers both reaching a clear impasse, and Bitcoin is struggling to garner any decisive momentum.

NFT’s, however, began to establish themselves as a reputable route after Canadian rapper Tory Lanez used his massive platform to release “When It’s Dark,” his first ever NFT album.

Lanez didn’t just sell the album as its own self standing product. He also sold the opportunity for the listener to make money off the album by reselling it on the market at a higher price than market value.  People have grown intrigued by the dynamic NFTs created between an artist and their consumer and questioned whether NFTs are a product that has the potential to achieve longevity in the future.

I was given the opportunity to interview Steampunk, a NFT pixel artist who amassed an impressive 4,000 followers and has been growing since May 2021.

Jason: For those who are unaware, define what a NFT is in the most simplest way possible? Getting a grasp on cryptocurrency is hard enough as it is, even for those with years of experience on their hands.

Steampunk: An NFT is a Non Fungible Token. It’s something that’s been created and lives forever on the blockchain – let’s say the blockchain is the rail system on which cryptocurrencies and NFTs move around.

An NFT can be anything: an image, a video, or an audio file. It can also be used as something in real life. For example, let’s say I make a collection of 50 “tickets” to my fair. If you buy one, then come to my exhibition, I can easily verify that the ticket is authentic and belongs to you, granting you access to the fair.

Then there is the profile pictures collection, usually released containing 10,000 pieces, with rarity traits (which increase the value of the NFT.)

These are usually algorithmically generated by a pool of traits (blue hair, blonde hair, red hair & glasses, red glasses, white glasses, no glasses, etc), so each one of the 10,000 pieces are totally random. 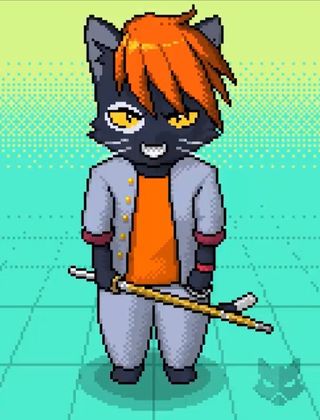 Sample of NFT Pixel Art giveaway via Steampunk on Twitter

Jason: What made you get into NFTs and is there a particular goal you are trying to achieve?

Steampunk: There’s no particular goal for me besides my seeking personal enjoyment and fulfilling my own curiosity.

I lost my job back in March 2021, and I heard about NFT on the TV upon seeing an Italian singer drop their new song through an NFT. Afterwards, I dug into this and discovered this incredible world.

For right now it is solely about making some art, pushing my name deeper into the community and helping to build a community revolving around the people in the NFT business.

Jason: Do you believe that the “business side” will impact a creator’s creativity and genuineness in creating a NFT? After all, putting a price tag on an artist’s creativity can end up swaying the artist to look at artwork as a practical way to support themselves financially, rather than creating artwork at face value?

Steampunk: Yes, the business space is already too crowded, because “copycat” and other similar collections are growing. However, I think that in the end the most sincere and unique artists will make it. You obviously have to watch out, because many collections of profile pictures are promising big roadmaps coming. One example is owning a particular token and then being promised a T-shirt with the logo in five months — only for the creator to disappear right after the drop, obtaining a massive payday for themselves in the process. This is the mindset behind the schemes that go behind the notorious NFT and Cryptocurrency scams.

Jason: How will NFT’s enhance, or prove detrimental to the artist, and does the dynamic between the consumer and artist change?

Steampunk: I see NFT as a big opportunity for artists. I have already seen so many people make it in this space, people that could not only sell, but didn’t even know where to sell their art. Now these very same creators have thousands of eyes on their art, and are often able to sell it at prices that weren’t even in their dream.

Besides, you can grow a strong relationship with your buyers, which on the other hand will be more inclined to buy from you again. 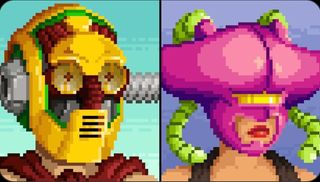 Sample of NFT Pixel Art giveaway via Steampunk on Twitter

Jason: Where can we find some more of your work, and keep tags on your future endeavors?

Steampunk: You can find my works on OpenSea, the biggest marketplace right now for NFT, and also on Twitter.

Twitter right now is the best platform to grow a community and stay updated with this space.

A few weeks ago Twitter announced future integrations with NFT’s, including a verification process of your profile picture (verifying that it belongs to a real NFT collection) and a “collectibles” page on every profile to show what NFTs you collected so far.