For many years, YouTube has been my escape from reality. I even started my own channel, which I don’t tend to as often as I would like. It has become the place I go when a break is much needed. For some reason, watching other people’s lives inspires my day-to-day life. I have an entire list of people that I catch up on regularly, but there is one in particular who holds a special place in my heart.

Jaclyn Hill has always been someone I’ve looked up too. She is funny, witty and incredibly talented when it comes to makeup. She doesn’t hide her life from the camera and that is something I appreciate. She doesn’t hold back either and is always straight-forward with her subscribers. Even though she hasn’t been as active as she used to be due to her personal life and recent divorce, I still love her. I have tried my hardest to get all of her collaborations. I have her highlighter with Becca cosmetics, her OG favorites palette with Morphe, as well as her original palette from the Jaclyn x Morphe collab. She is someone who inspires me to be creative with makeup and feel comfortable in my skin. I’ve been a subscriber of hers since her second video. She will always be my go-to.

I like to laugh in my free time, so I often look for content that can make that happen. One Youtuber I’ve come to enjoy consistently for that purpose is Gus Johnson. His content reminds me of the old style of skits that CollegeHumor used to do on the platform.

Gus Johnson in his most viral video with 4.6 million views, “Every Cat at 3AM.” Screenshot captured by Cole Garrow. All rights go to Gus Johnson.

Although Gus isn’t my favorite on the platform, that spot belongs to a very unique channel called Sailing La Vagabonde. Sailing La Vagabonde is a sailing YouTube channel that chronicles the mostly crowdfunded adventures of Australian sailors, Riley and Elayna. Elayna is largely the one responsible for consistently making their spectacular 10-to-20-minute episodes of what it’s like to live at sea and sail around the world visiting all sorts of exotic locations.

Riley and Elayna on their boat at a port in the Spanish Mallorca Island. Screenshot captured by Cole Garrow. All rights go to Sailing La Vagabonde.

I’ve always wanted to travel and visit all kinds of locations and cultures, but being a college student makes that difficult. In the meantime, they allow me to do that vicariously through them.

The sort of freedom and lifestyle they seemingly experience, which is so foreign to me, is as captivating to watch as are the beautiful landscapes they upload for the world to see. It is such a small niche they have developed and yet, to someone such as myself with nearly no ability to relate to that kind of lifestyle, it’s so fascinating. I can’t help but return every week and catch up to see them exploring a mostly forgotten port-town off the coast of somewhere or just afloat in the sea with no land in sight.

Hardships and all, the experience is an alluring one and an inspiring one. Their content is refreshing after the day-to-day we live. They never fail to uplift and make me want to get more out of life.

I could sit here for hours and talk about my favorite YouTube channels. I’ve been watching YouTube religiously since probably 2012. I remember watching Pewdiepie when he screeched his way through Slender gameplay, cursing in Swedish. Any other YouTube veterans will know that it has been a while.

Currently my subscriptions list is about a mile long, and that has to do with the fact that I have a very wide range of interests. Right now, I’m engrossed in cooking videos, but not your average recipe, “today-we’re-going-to-cook” videos.

When I discovered Epicurious, I immediately binge-watched all of their “Basic Skills Challenge” series, in which they challenge 50 people to perform a kitchen task that should be simple, like making pancakes, cutting a watermelon or shucking corn. You’d think the results would be boring, but fascinatingly, many people have zero clue how to do these things and it makes for an interesting and hilarious video. 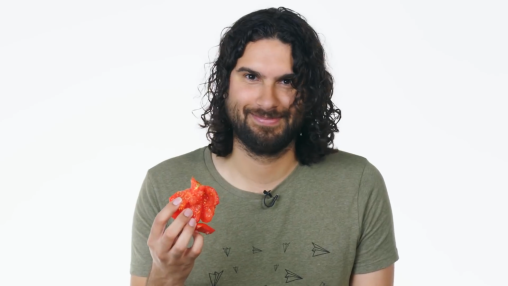 One person’s attempt at peeling a tomato from “50 People Try to Peel a Tomato.” Screenshot captured by Kaylee Adams. Photo rights go to Epicurious.

However, I soon caught up with the series and moved on to “4 Levels,” in which an amateur cook, home cook and professional cook all make the same dish and a food scientist critiques each cook’s culinary decisions. I also watch some episodes of “Price Points,” a series that takes an expert in a specific category (e.g. a salt expert, hot sauce expert, coffee expert, etc.) and challenges them to guess which of the presented items is the more expensive.

Other channels with similar challenge-based cooking videos that feed into this guilty pleasure are Bon Appétit and Tasty.

Dead Meat is a channel on YouTube that focuses on many things involved in the horror movie genre. The channel is hosted by James A. Janisse. On Fridays, the channel uploads their show, “The Kill Count.” On Saturdays, episodes of their podcast are uploaded.

“The Kill Count” is a comedic show that counts all the kills in various different horror movies. While it is funny, it can also be insightful. Janisse provides facts and history to the horror movie included in each episode of the show. He gives cool information that most fans might not know otherwise.

The podcast includes movie reviews of old and new films, as well as interviews. This show is similar to “The Kill Count” in the sense that you can have a laugh, but also learn some really interesting information about your favorite horror movies. I would highly recommend checking it out if you’re a horror fan.