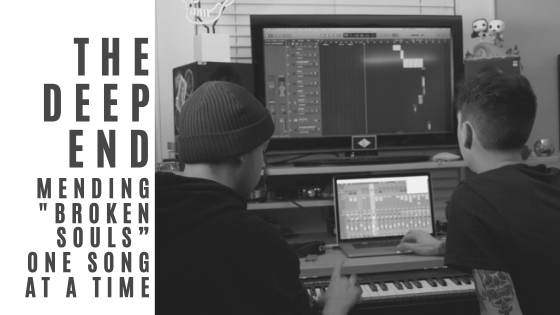 The Deep End: Mending “Broken Souls” One Song at a Time

Four years ago, Max McGill and Ty Iannelli met. Both into music and both in different bands, the two had a connection that just “felt right.” While the original idea was for Iannelli to join McGill’s old band, the two decided to start something new and The Deep End was born.

The Deep End, from Long Island, NY, is made up of Max McGill, 21, who sings and plays guitar and Ty Iannelli, 20, who plays guitar.

Unlike most bands, The Deep End won’t describe their band’s genre as having just one specific sound. The pair likes to think of their music as unique, and that it has something in it that everyone can find enjoyable.

“I just want there to be something for everybody,” McGill said.

On top of having a unique sound, The Deep End feels that it is important not to label their sound so listeners can come to their own conclusions and take the music for what it is. Not defining their sound breaks the band out of a stereotypical box and allows them to have the freedom to try new sounds and develop new ideas and styles for their future music.

“I feel like it’s important to me to not put us in a box,” Iannelli said. “To let other people kind of think for themselves and take it for what they want to take it as.”

Going along with this idea of creative freedom, The Deep End takes inspiration from a lot of different places in their lives, like other musicians or events that they encounter. While inspiration comes from all around, the band tries to be as original as possible, not fully sharing where all of their inspirations come from is one way they do this.

The Deep End takes this idea from Tyler Joseph of Twenty One Pilots who said something along the lines of, “If you tell people where your musical inspirations come from, they will look for it and pick it out in your work.”

From a young age, both men knew that they wanted to perform and be involved in music. McGill was raised listening to a lot of music, and Iannelli would ride his bike while listening to music daily. For the men of The Deep End, one of their goals is to make fans feel the way the music they grew up listening to made them feel.

“If I could make somebody else feel the way that music makes me feel,” Iannelli said. “That would be a dream come true.”

Because The Deep End is currently only made up of the two men, there is a strong relationship that has formed between them. McGill and Iannelli both find each other to be hardworking, determined and loyal individuals.

“He’s [Iannelli] trustworthy,” McGill said. “In a sense that if I got in a car accident on the way to a meeting about the band, and the only person that was there was Tyler, I would know that everything would be fine. It would be the same thing as if I was there.”

To make the band relationship work, there is a lot of communication that is involved. Bouncing ideas off of each other and making sure both are involved in creating content is important. The two talk to each other every day and work as a team to take their ideas and turn them into projects they are proud of.

A struggle that the band has overcome is finding people with similar goals and aspirations. Starting a band can be hard because getting a group of people together and making it work is a challenge, but once McGill and Iannelli began playing together, they knew that the bond they shared was their solution to this problem.

“I just want to be fulfilled with what we’re doing,” McGill said. “Happy with the music that we’re making and the way we’re doing it.”

Struggles will not slow The Deep End down though. The band pushes past struggles every day to be the best they can be and to achieve the goals they have. One goal The Deep End had was to have their EP, “Broken Souls,” which came out June 7, reach 100,000 streams on Spotify.

Ever since the EP came out, they have been checking the apps that streaming platforms have for artists on their phones. Every day they check the app to track the streams and on October 18, the EP reached its goal and received 100,000 Spotify streams.

“We were just stoked,” Iannelli said. “When starting this band, we had no idea we’d reach that kind of audience. It’s an amazing milestone to reach, and we’re hoping someday to hit 200,000.”

But the goals don’t stop there. The Deep End hopes to one day play huge shows and to continue to impact the people who listen to their music. The band enjoys when fans reach out to them on social media to tell them what they think about their music, and they don’t take the interactions that they have with their fans for granted.

To connect with The Deep End while they are currently in the studio working on new music, you can reach out to them on social media:

In the meantime, their EP “Broken Souls” is available to stream on Spotify and Apple Music.

“We’ve got new music coming soon,” Iannelli said. “We’ve got new content, and we’re working on a lot of stuff, so just definitely be on the lookout and follow those socials.”